OREANDA-NEWS. TimkenSteel (NYSE: TMST) (timkensteel.com), a leader in customized alloy steel products and services, today reported that it expects first-quarter net sales of approximately $309 million on 280,000 ship tons and a net loss of approximately $5 million, as compared with fourth-quarter 2016 net sales of $215 million and a net loss of $67 million. The company expects EBITDA for the quarter to be approximately $17 million, which is lower than its original guidance.  TimkenSteel will release full financial results for the first quarter on Thursday, April 27.

"Quarter-over-quarter sales have increased by about 45 percent primarily due to increasing demand and new business. The sequential improvement in structural EBITDA was about $15 million, which is significant, although below our original expectations due to the timing of capturing manufacturing leverage," said Tim Timken, chairman, CEO and president. "As we ramp production, we're hiring to increase capacity to serve rebounding demand while also drawing from inventory in greater proportions than we had anticipated." 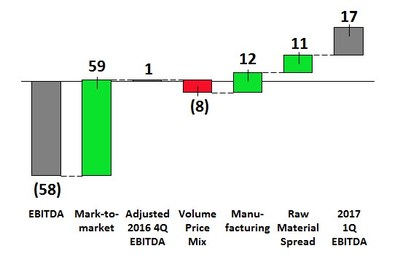 The full financial results and first-quarter 2017 earnings supporting information will be available after the close of market trading on April 27 at investors.timkensteel.com. A conference call to discuss the performance will follow at 9 a.m. EDT on Friday, April 28.

About TimkenSteel Corporation
TimkenSteel (NYSE:TMST, timkensteel.com) creates tailored steel products and services for demanding applications, helping customers push the bounds of what's possible within their industries. The company reaches around the world in its customers' products and leads North America in large alloy steel bars (up to 16 inches in diameter) and seamless mechanical tubing made of its special bar quality (SBQ) steel, as well as supply chain and steel services. TimkenSteel operates warehouses and sales offices in five countries and has made all of its steel in America for 100 years.

This news release includes "forward-looking" statements within the meaning of the federal securities laws. You can generally identify the company's forward-looking statements by words such as "anticipate," "believe," "could," "estimate," "expect," "forecast," "outlook," "intend," "may," "plan," "possible," "potential," "predict," "project," "seek," "target," "should" or "would" or other similar words, phrases or expressions that convey the uncertainty of future events or outcomes. The company cautions readers that actual results may differ materially from those expressed or implied in forward-looking statements made by or on behalf of the company due to a variety of factors, such as: the finalization of the company's financial statements for first-quarter 2017; the impact of mark-to-market accounting; the company's ability to realize the expected benefits of its spinoff from The Timken Company; deterioration in world economic conditions, or in economic conditions in any of the geographic regions in which the company conducts business, including additional adverse effects from global economic slowdown, terrorism or hostilities, including political risks associated with the potential instability of governments and legal systems in countries in which the company or its customers conduct business, and changes in currency valuations; the effects of fluctuations in customer demand on sales, product mix and prices in the industries in which the company operates, including the ability of the company to respond to rapid changes in customer demand, the effects of customer bankruptcies or liquidations, the impact of changes in industrial business cycles, and whether conditions of fair trade exist in U.S. markets; competitive factors, including changes in market penetration, increasing price competition by existing or new foreign and domestic competitors, the introduction of new products by existing and new competitors, and new technology that may impact the way the company's products are sold or distributed; changes in operating costs, including the effect of changes in the company's manufacturing processes, changes in costs associated with varying levels of operations and manufacturing capacity, availability of raw materials and energy, the company's ability to mitigate the impact of fluctuations in raw materials and energy costs and the effectiveness of its surcharge mechanism, changes in the expected costs associated with product warranty claims, changes resulting from inventory management, cost reduction initiatives and different levels of customer demands, the effects of unplanned work stoppages, and changes in the cost of labor and benefits; the success of the company's operating plans, announced programs, initiatives and capital investments (including the jumbo bloom vertical caster and advanced quench-and-temper facility); the ability to integrate acquired companies, the ability of acquired companies to achieve satisfactory operating results, including results being accretive to earnings; the company's ability to maintain appropriate relations with unions that represent its employees in certain locations in order to avoid disruptions of business; and the availability of financing and interest rates, which affect the company's cost of funds and/or ability to raise capital, the company's pension obligations and investment performance, and/or customer demand and the ability of customers to obtain financing to purchase the company's products or equipment that contain its products.